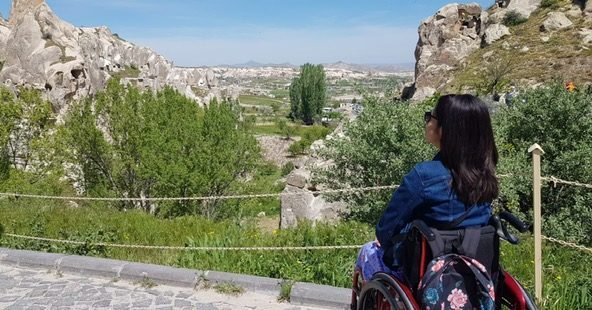 Last May, Rita and I had our first brush with danger.

My friend Helen and I had booked  an organized tour in both Istanbul and Cappadocia, eager to take on the hot-air balloon flight the latter is known for. Steeped with cavernous hilltops and cone-shaped rock formations they call “fairy chimneys,” Cappadocia is a landscape to behold. Stacked with ancient cave dwellings and towering boulders, this Anatolian region entwines both human history and a lust for cultural authenticity. It’s no wonder they use the land as a platform for the countless balloon voyages, all gliding in unison like jeweled doves.

We experienced 21st-century cave-living in a cozy cave hotel in the town of Goreme. It was the first on a long, winding hill that led to a parade of competing cave hotels that might have boasted better views, but like ours, promised reclusiveness over a a golden hued sunset. A humble city, Goreme caters well to the flurry of tourists, with their strap-on cameras and straw hats, with rows of market stands the size of a walk-in closet. Overly eager shopkeepers loiter outside determined to get you to choose from their array of local products, from Turkish doner kebabs to ceramic pottery and homeware, and of course, the ever elusive deal of a lifetime: the hot air balloon ride. Yes, for just a few hundred euros, you too can book your chance to float over the Cappadocian sunrise and walk away with a selfie even your neighbor’s dog would be envious of (selfie stick not included). 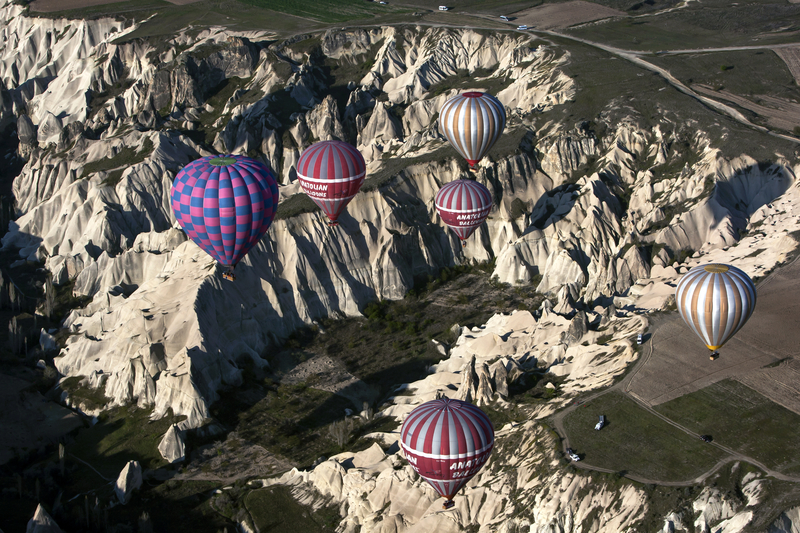 Helen and I had booked our adventure several months ago through a private company, only to discover just days before our trip that the flight hadn’t been reserved at all and we had been tucked away onto a waiting list the length of a football field. There we were, left to dangle, like nerdy teens waiting in line for Star Wars tickets… checking again and again for the email confirmation that never came.

Every morning at 5am we’d hear the clumsy footing and chit chat of our neighboring guests, all clamoring to the bus that would lead them to the kaleidoscope of colors that awaited them up above. True to my superstitious Latin nature, the first morning I woke up thinking we were being visited by noisy poltergeists who had turned in their heavy chains for intermittent cackling. Helen eventually rolled over to tell me that the ghosts were very much alive and heading to the Promised Land…well, sky. Hours later, the echoes would return, a powerful new lilt in their voices, their footsteps a light patter, now waltzing to a new serenade. They were nauseatingly happy. I yanked the plush pillows over my head while in the fetal position, in a desperate attempt to stifle the noise…and pangs of jealousy. And yet I still checked my phone soon after for the message or call promising we’d also be up at the crack of dawn, sleepy-eyed, stale breath and all. Still nothing.

On our second day in Cappadocia we arrived in Monks Valley, an area

noted for its fairy chimneys and unusual stretch of lunar landscape. Our tour group consisted of about 10 people from all corners of the globe: Australia, Colombia, Mexico, and Mauritius. They were a friendly bunch, intent on discovering this Turkish haven.

As we left the bus behind, I noticed Rita was moving rather stubbornly. Our foreheads already slick from the morning sun, Helen and I were quickly working up a heavy sweat trudging up the rocky pathway that led to the main entrance. We’d pause abruptly every couple of meters, with my body jerking forward and my neck jutting out like a hungry little sea turtle. With confusion drawn across our faces, we stopped and looked down at Rita’s wheels and both our mouths gaped open. The left caster (front) wheel was barely attached to its fork (where the wheel is fitted) and was, in fact, coming apart. For the first time ever, I had a glimpse of what it feels like to almost pass out from the sheer shock of a moment. My head spun like the inside of a blender and my clammy fingers cupped my forehead like moist mop threads. My underarms sweated through my sky-blue dress, as beads of panic rolled over my cat-eye sunglasses. I felt like a contestant on Survivor, out in the middle of nowhere with no celebrity host or camera crew to lean on in case of emergency.  Here we were, chair-wrecked, my studio audience a blur of sweaty tourists. “Oh shit,” was all I could muster. “We might need to have a little talk later, Rita,” I thought grudgingly.

With our tour group now far ahead of us, we quickly went into MacGyver mode, making a general inspection of what we had to work with but also remembering we were nowhere near our hotel, or town for that matter. Eventually, I got up and sat on a ledge so Helen could lift up Rita’s lower body and place her backseat on the ashen ground. She rotated the right wheel, relieved to see it wasn’t suffering a similar fate as its lopsided twin. Passersby began to linger and I could feel my cheeks turning as bright as Rita’s red frame. “Geez, Rita, you sure know how to make an entrance, don’t you?”

Then it hit me. Just two days ago, airport security had questioned me over a small Velcro-lined black pouch that was hidden underneath Rita’s seat. When asked to reveal the contents of the mysterious compartment, they exchanged quizzical glances but reluctantly let me go through. The items were sure to be there still, inside Rita’s carefully concealed “lady purse,” and I thanked the wheelchair gods. We might get through this mechanical snafu after all! In that moment that pouch was my Narnian closet, just brimming with powerful and all-knowing treasures.

I reached down and there they thankfully were: a miniature collection of hand tools lined up flat like make-up brushes or a manicure set – Rita’s personal beauty kit. Almost simultaneously, a local man approached us, noticing something had gone wrong. He had a slight frame and wore a white shirt that seemed weathered from the harsh sun. We didn’t speak each other’s language, but I gathered he had seen enough. Rita still lay on her back like a woman in labor, her dusty footplates spread apart as if on stirrups. With a shy but determined look in his eyes, the man took the plastic-wrapped tool kit and crouched over the caster wheel, rotating it just as Helen had done. He was the master of this operating room with mini screwdrivers and wrenches being hurriedly passed from hand to palm and back.

And then just like that, Rita’s wheel was magically back in its place. My local hero (whose name and photo I sadly forgot to ask for) smiled with pride – the effusive praise making him cower just a little. He walked away refusing payment, and we were left to continue our journey, Rita now back to her steady self over the cobblestone ridges. Later, I looked out over the mountain tops, collecting my breath and sanity, knowing that it could have been much worse than it was. I searched for him in the crowds – this kind man that had unknowingly saved us a whole lot of grief – and for the 50th time, I thanked him again in my mind.

We never made it on that hot-air balloon. I’d like to think it just wasn’t meant to be this time. But I walked away with so much more than the dizzying beauty of a perfect view. Once again, I was reminded of how much good there is in humanity and in the little things. People, in their essence, are happiest when they can give. Over the years, I’ve had to rely on the kindness of strangers, and that kindness – that willingness to help out our fellow man no matter the odd circumstance – has kept me afloat….and always surprised. Watching my friend and a stranger hunched over a dirty broken wheel might have been the more humbling view I needed that day. And while I didn’t reap the glory of a selfie in the skies, my memory tells me I was still given more than I bargained for.

At Rita’s very special request, she’ll be getting a tune up before the next major trip. All in all, I think we both win.

2 thoughts on “Wheel of Misfortune”

This site uses Akismet to reduce spam. Learn how your comment data is processed.